What is a Cryo-EM?

We are working on a drug discovery based on structural analysis using a Cryo-electron microscope (Cryo-EM).

What is a Cryo-EM?

The Cryo-electron microscope (Cryo-EM) Single Particle Analysis (SPA) method is one of the structural analysis methods using an electron microscope, which was awarded the 2017 Chemistry Nobel Prize and has been receiving a lot of attention in recent years.

Conventional drug discovery research (HTS) requires millions of trials and errors (evaluation of millions of compounds) until a hit appears against a protein of unknown structure. This approach requires cost and time.

By using a Cryo-EM, structural analysis became possible for many proteins that were difficult to analyze by X-ray structure analysis, which is known as a conventional analysis method. By introduction of Cryo-EM, the number of proteins that can be reliably analyzed has increased, and it is paving the way in expanding a new drug discovery area. 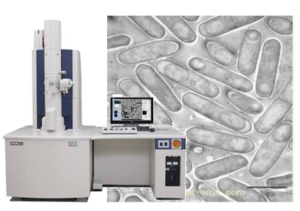 Cryogenic is a technology that generates low temperature. The term comes from combination of “cryos” which means “cold”  and “gennese” which means “to produce” in Greek. Cryogenic electron microscope, commonly known as CryoEM, is a transmission electron microscope (transmission electron microscope) that irradiates biomolecules such as proteins with electron beams under liquid nitrogen (-196 ° C) cooling and observes samples. This is a new method based on TEM). As a method for determining the three-dimensional structure of proteins with high resolution, we have made remarkable technological innovations in detectors, etc. In 2017, the Nobel Prize in Chemistry was awarded to three overseas researchers who contributed to the development. In 1995, it was theoretically shown that this new method can analyze the structure of molecules up to 100 kDa * ¹, and since then, especially after 2015, active research and development has been carried out, and the recent “Resolution Revolution” makes it possible to elucidate the molecular structure with a resolution of 1.5 Å * ² or less. Recently, it has become possible to analyze the structure of molecules in the vicinity of about 50 to 60 kDa.

By resolution: Changes in the number of protein analyzes by CryoEM 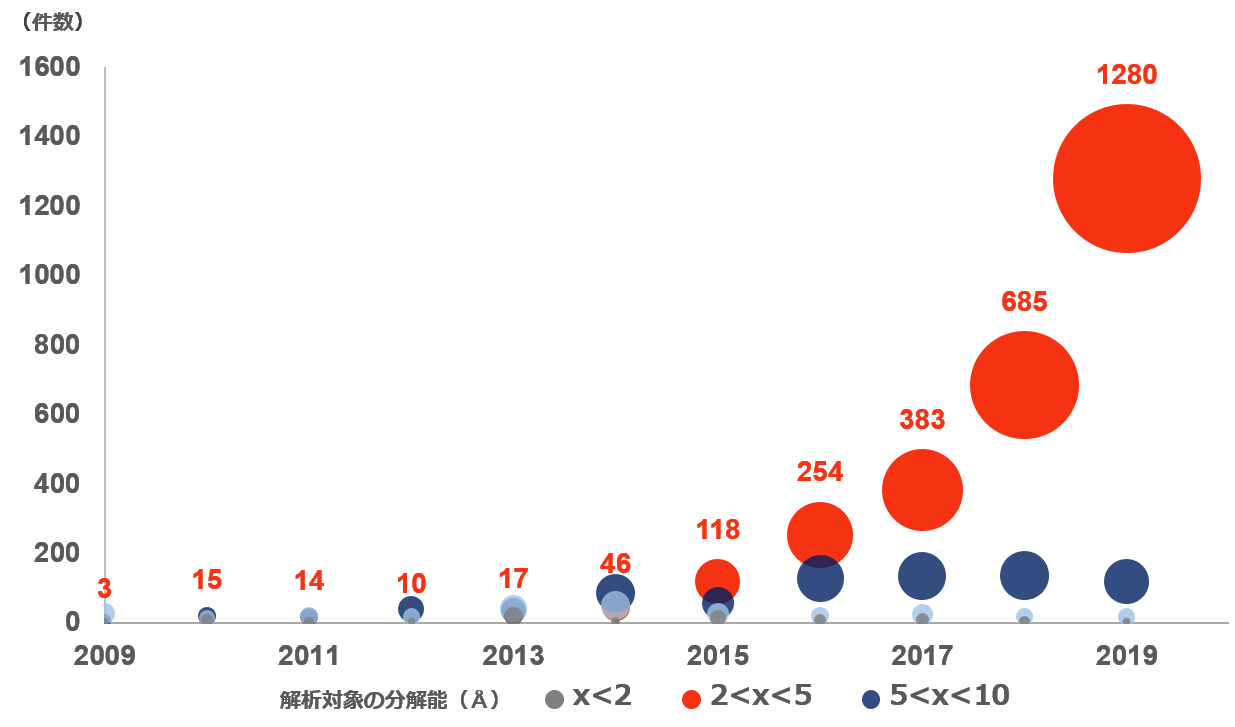 It can be confirmed that the number of cases with a resolution of 2Å-5Å has increased sharply in the past 5 years. Source: Created by information from Protein Data Bank Japan

Single particle analysis method What is Single Particle Analysis (SPA)? A large number of images (photographs) of protein molecules are taken using a transmission electron microscope under liquid nitrogen temperature conditions (cryo). It is possible to reduce noise by taking the averaging of a large number of captured images, and improve the resolution of the observed protein through averaging in 2D and averaging in 3D construction.

Features and benefits of CryoEM

Strengths and areas of expertise in drug discovery